Ep 1: BK Loren on Nature, Grounded Spirituality, and the Power of the Unnameable

Ep 1: BK Loren on Nature, Grounded Spirituality, and the Power of the Unnameable 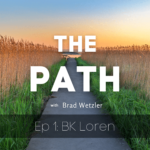 Enlightened-ish with Brad Wetzler Podcast
Ep 1: BK Loren on Nature, Grounded Spirituality, and the Power of the Unnameable

Join me as I talk with BK Loren about the power of nature and the things that can’t (and shouldn’t) be named.

BK Loren is the award winning author of the novel THEFT, and the essay collection, ANIMAL, MINERAL, RADICAL. Her short fiction and essays have garnered many national awards and have been published in The Best Spiritual Writing Anthologies (2004 and 2012), Parabola, Yoga International, Orion Magazine, and many others. She is from a working class family and has usually worked in jobs that allow space to write as she works. She’s been a ranch hand, a cook for a gourmet catering service in NYC, a cook, also, in a cafe run by a reverend healer who cured people’s ailments with a pendulum and herbs. She was also an aide on a locked psych ward, a tenured college teacher, and a furniture builder. She was extremely grateful for the chance to go to college (not a given)–and she attended the University of Colorado (Classics/Philosophy), the University of New Mexico (Lit), and the Iowa Writers’ Workshop, (Fiction). She feels that her varied experiences in other fields inform her writing as much as her schooling has. The publishing editor of her first book told her I wrote like she was raised by wolves. She tries to live up to that daily. TWITTER FACEBOOK RADIO KRUU, WRITERS’ VOICE KBOO, a podcast from Orion Magazine and something completely different than Theft or Animal, Mineral, Radical. Theft has been optioned for film, and BK will be writing the screenplay.

Music credit: “sun of the most high” by ketsa

Brad Wetzler is an author, journalist, podcaster, and yoga + mindfulness teacher, and writing mentor. He writes books (and articles) and hosts a podcast about adventure healing, emotional wellness, and faith & spirituality. His memoir, “Adventures in Healing,” will be published in 2023. I began my career as an editor and adventure-travel writer. I served as a senior editor at Outside magazine, and I was a contributing editor at Outside, National Geographic Adventure, and George magazines. I have written hundreds of articles and essays on far-ranging topics.