Ep 2: Matthew Andrews on Yoga, Pilgrimage, and the Transformational Gifts of Devotion

Ep 2: Matthew Andrews on Yoga, Pilgrimage, and the Transformational Gifts of Devotion 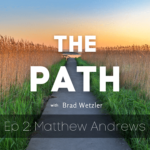 Matthew Andrews is a writer, musician, entrepreneur, spiritual activist, and yoga teacher. He is co-owner of Yoga Center Amherst, which has had an average of about 1400 class attendances per month since 2016. He has completed 500+ hours of yoga teacher training, has co-taught several Embodyoga teacher trainings, and has organized and led eight yoga-oriented retreats in North and South India, with over 150 total attendees.

Matthew’s spiritual path has developed in the midst of a rich, full life. Before owning Yoga Center Amherst, he was Senior Director of State Operations for Best Buddies International, responsible for over 100 employees and a $12 million annual budget. And he is currently President of the Board of Directors for Auroville International, USA, which supports the International Township of Auroville in South India. In 2020 he co-founded Reparations for Amherst Massachusetts, which worked with Town Councilors to pass a resolution apologizing for slavery and is now building a fund to pay material reparations.

Matthew first traveled to India in 2000, and since then he has been on a quest to understand and embody the teachings of yoga. He has studied ancient and modern texts and traveled to India ten times, but his most significant learnings have come through the embodied guidance of his guru GurujiMa.

Matthew is also a singer and songwriter, and in 2020 he released an album of sacred music called Let It Open. It’s available on all major streaming platforms.

Music credit: “sun of the most high” by ketsa

Brad Wetzler is an author, journalist, podcaster, and yoga + mindfulness teacher, and writing mentor. Brad began his career as an editor and adventure-travel writer. He served as a senior editor at Outside magazine and was a contributing editor at Outside, National Geographic Adventure, and George magazines. Brad has written hundreds of articles and essays on wide-ranging topics. He writes books and articles and hosts a podcast about adventure healing, emotional wellness, and faith and spirituality. His memoir Into the Soul of the World will be published in 2023.